So there is a new royal baby in England and we can’t get enough of those millisecond long micro-video clips of a solemn British public school lad and his cheerfully waving two-year old sister arriving to visit a tiny baby who, at only a few hours old is the sixth most important celeb in the Uk.

And yet dammit I am a raving republican at heart (not the rabid gun-slinging American type, but ,the Liberté,Égalité et Fraternité type, or, more specifically, the African independence-from-colonial-slavery type). 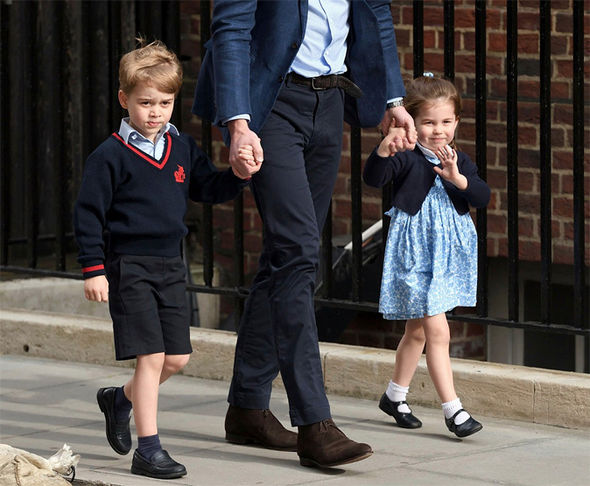 Why am I so drawn to dear Cathy and Bill (can you see them as an alternative to the old Cathy and Mark readers – not as hip as ‘Biff and Chip’ though – but the royal nippers are kind of Cathy and Mark-ish – or ‘Janet and John’, in their dress. We could do a new version of readers called ‘Charlie and George and one could be ‘Charlie and George Visit the hospital’ or ‘George and Charlie have a new brother.’ ‘The Windsors and their Bro’? It could have cool sentences like: This is Charlie. See her wave. This is George. He is a boy. Now he is not the only boy. See George sulk. This is the baby. He is wrinkled.  (Perhaps ‘wrinkled is too difficult for new readers.)

What on earth attracts us to wealthy celebrities (because that’s all the royals are now)? Of course these are folk who are paid for by  the poms’ taxes and not by ‘royalties’ (ha ha interesting word that!) from their own success. There is something in us so perverse that in our ordinariness we so desire their status that we put them on a  pedestal. WE  create the celebrities; WE design the hype around these ‘stars. WE give them their power!

Grown men and women devote their whole adult lives to following other  people around in order to catch them with their telephoto lenses in unguarded moments.  Those brief shots of the princess’s wave will make some paparazzo very rich (Interesting how we never use this word which is the singular of ‘paparazzi’ which originated as a character in a Fellini film, and which the director felt reminded him of an annoying buzzing insect). But seriously?! She is a just a little girl! I have way cuter little poppets  bursting out of my classrooms at school and no one is aiming a  long lens at them (of course I wouldn’t let them, but still) The only reason this mite is famous is that the media (and the publicwho are all gagga over a random family descended from long-ago Germans) have made her so.

Define ‘nobility’, ‘royalty:’ Let’s face it in the past monarchs and ‘the nobles’ were generally just more powerful, wealthier, with good spin doctors who convinced the proletariat

that they were somehow of greater value. Some even considered themselves anointed by God! If you know your Old Testament you will know that even God did not want the Israelites to have a king (probably because He knew what would happen – and He was right – the very first one, straight out of the blocks, gave himself airs and graces).

For an egalitarian like me, this is anathema. My school’s motto is ‘egalite’ and we stress the fact that we all equal. So why oh why am I drawn to a Sloane family in a far-off rainy island?! He’s balding and toothy but I guess she’s a lovely clothes horse and I like the glamour. Is that it? We want to see that someone has what we want so we can believe it’s possible?

at guy in the big hoodie with the kick-ass blade. And because, famous people seem to have transcended the mortal realm somehow, the idea that we shall shuffle off this mortal coil either recedes or seems less bothersome.

Psychologists! Gotta love ’em! Mind you, one study at the U of Arizona suggests that people become more positive about celebs after a brush with death so perhaps there is some truth in this.

What’s particularly amusing is the amount of money wasted at the bookies betting first on the gender of the royal baby and then its name/s. Not me!  Prince Biff or the Duke of Chip would be fine with me.  It’s just Cathy and Bill’s kid after all! I wonder if they also had elderly aunts pointing out that ‘Arthur is not a saint’s name, you know’ or ‘You can’t call him Louis: that’s too French?! ‘

“In the past, people were born royal. Nowadays, royalty comes from what you do.”

Ah well! when all is said and done, perhaps I am merely jealous. And I’m glad I don’t have to bow to anyone ever.

Now whose house are we watching the Royal Wedding at next month?