Reality sets in as the dirty dishes are passed down the table and the hapless youngsters tasked with washing up protest their lot in life. The beautiful, home-crafted crackers lie forgotten amidst the gravy spills – with their cute innards evidence of their disembowelment; their wisdom abandoned amidst the broken cordite, chocolate wrappers and stray peas. And the cynic in you thinks, ‘Ah well, that’s Christmas for another year.’

The days which follow seem such an anti-climax after the eager anticipation of all the family get-togethers, littered as they are with sighs about pretty though the tree is ‘soon you’ll make us help take it down’ and ‘oh my gosh I ate too much’ (me); ‘I cannot bear the thought of going back to work’ (those unfortunate folk who haven’t taken leave); ‘OMW Payday is a long way away’ (all of us) and of course the cry in our house of ‘Who finished all the coke/icecream/pudding leftovers?!’ (Liam did -teenagers have hollow legs I am sure.)

From my writing table, I look out of my window over the street and see a jogger trudging up the road in his matching new neon trainers and T-shirt, and admire his post-prandial energy. In a way he is a metaphor for what life after Christmas should be: facing everyday activities with a shiny new outlook and renewed energy and strength to cope with life.

Now, gentle reader, do not panic that you shall soon see me waddling up the street in Barbie-pink running knickers, powered by pale, cellulite-speckled thighs. Perish that thought. (Although I shall definitely need to do something to counteract the effects of those extra mince pies and the tin of nougat which is disappearing at an astonishing rate.)

But if our world is not a little more sparkly and a touch happier after the festive season, we have indeed missed the point of it all, even if one is not a Christian. If we are not a tad more grateful and a great deal more aware of our blessings then the celebrations have been mere duty and box-ticking.

The fact that the feast of the Holy Family follows on so soon after Christmas is not surprising. I am sure Mary and Joseph also felt a sense of let-down after the euphoria of the baby’s birth and its attendant trumpet-wielding angels, not to mention smelly shepherds and baaaing sheep disturbing their peace.

Picture courtesy of Jim Worth with Dominic Hart on Facebook

But in the aftermath of that magical night, I am sure the enormity of their situation must have been quite overwhelming especially when the threat of Herod’s jealousy became known to them. Yet they slipped away into obscurity in Egypt as refugees in a foreign land and the next we hear of Jesus is at the time of his wandering off in Jerusalem as a teenager. (I have to confess I would probably have spanked him when I found him, temple or not. But that is why God chose Mary and not me to be His mother.) 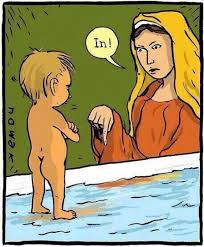 So their life was ordinary after Christmas although the gospels do tell us that He went home after the temple episode and w
as ‘obedient’ to them [Luke 2:51] (Hear THAT, teenagers). We hear nothing over those growing years because they were ordinary. (Well as ordinary as possible with a miraculous lad in the house.)

Yet it is important that we carry the Christ-child with us when we go about our drudgery. Putting up with Aunt Mildred’s criticism and the boss’s nagging; exercising a bit more to become more healthy and rid our bodies of dangerous fat so we are healthy for our children; loving our offspring, despite their moods are all just burdens unless they are done in shiny new ‘running shoes and T-shirts’ which say ‘I am blessed.’

Because we are. God is with us.